This is the start of a series of blog posts revolving around a massive scam network that targets individuals looking for tech-support regarding various software products. The scam mostly starts with fake Norton 360 and Norton Antivirus sites, however, has also been linked to fake Microsoft support sites and fake Facebook support sites (just to mention a few). We dug into this network, trying to identify the perpetrators behind it and used lots of different OSINT techniques over the course of several months. Every once in while a little social engineering came in handy, as we also contacted some of the suspected perpetrators directly. Our investigations are not over yet, there is still more to be found, but let us take you along this fascinating journey of online investigations.

Chapter 1 – It all starts with a bad sock puppet

Do you have a look at the accounts that connect with you on Twitter or Medium? I do, and so does my buddy Sector035. In late April 2019, a new person followed Sector’s blog on Medium and he had a look at this new follower.

A weird URL? A nice picture of a female named Pierre? This profile was begging for further research. The URL led to a tech-support site that listed the following phone number: +1-844-947-4746. Sector didn’t even wait to check this number on his computer and immediately googled it on his cell phone. I guess that’s what you call OSINT curious.

It turns out that this phone number was listed on numerous obviously fake sites and blog posts offering tech-support. Out of curiosity, we decided to take a closer look at some of the sites, in order to see how they were connected to each other and possibly find out who was responsible for creating them. At the time we had no idea how time consuming and big this project would be! Among the sites using the phone number, we initially concentrated on these four: 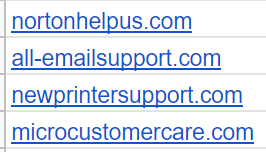 Each site looked worse than the other. Horrible design, bad English and next to the aforementioned phone number, they all used the same address:

While Sector started to check the WHOIS information using DomainBigData, GoDaddy and Whoxy, I looked into to Google Street View and did a little reverse image searching on the photos. It turns out that all the photos used were either stock pictures or stolen off other people’s social media profiles and the address itself was in an inconspicuous housing area. Googling the address led us to more suspicious sites, some of them using a different phone number. Among these was one belonging to a company allegedly called Energetics Squad LLC. No records existed for such a company in the State of Illinois, nor in any other state. Keep this company in mind, as it will show up in a later blog post as well!

The WHOIS check didn’t always provide the exact name of the registrant, but we found another similarity: most of the websites had been registered around March 13-14, 2019 in India.

Using DNSLytics, Sector also checked the Google Analytics ID and found that the sites were not only linked by all of what was described above, they also shared a common tracking code (UA-code). At this point, it was time to start linking the information in Maltego.

What started with a bad sock puppet, led to googling information and from there to a deep dive into domain data, Google Analytics research, as well as pulling corporate records from official state registries. The hunt was on and upon finding all this correlating data, we couldn’t just let go and decided to push forward.

Soon after, we started collecting information on an actual suspect and at a certain point engaged in an interesting conversation with this person. So, stay tuned for the next chapters of our fascinating journey!