What are backlinks and how are they used in the Norton scam? Our OSINT investigations lead us into the world of SEO.

Chapter 1 – It all starts with a bad sock puppet

Chapter 2 – The Art of OSINT

Chapter 4 – The more, the better

Our project started with a fake profile on Medium, which led us to several scam websites claiming to provide tech support. While the total number of these sites hasn’t risen much over the past months, entries promoting this scam on blogs, social media profiles and in comments on other websites have drastically risen. We see this as a crude search engine optimization (SEO) attempt.

Throughout the investigations we found individuals specializing in SEO, who where also likely linked to the network we were tracking. One of the sites that popped up in our search was yahoophonesupports(dot)com. Unlike previous fake sites that used Indian addresses and fake English-named personas, such as Nancy Wilson or Steven Dalton, this one was registered by someone named Jiya with a real looking email address. We had narrowed down our search to the city of Noida in India and the phone number used to register the site was definitely linked to our scam network. While most names used to register domains clearly came from fictitious peoples, maybe this was one was real. 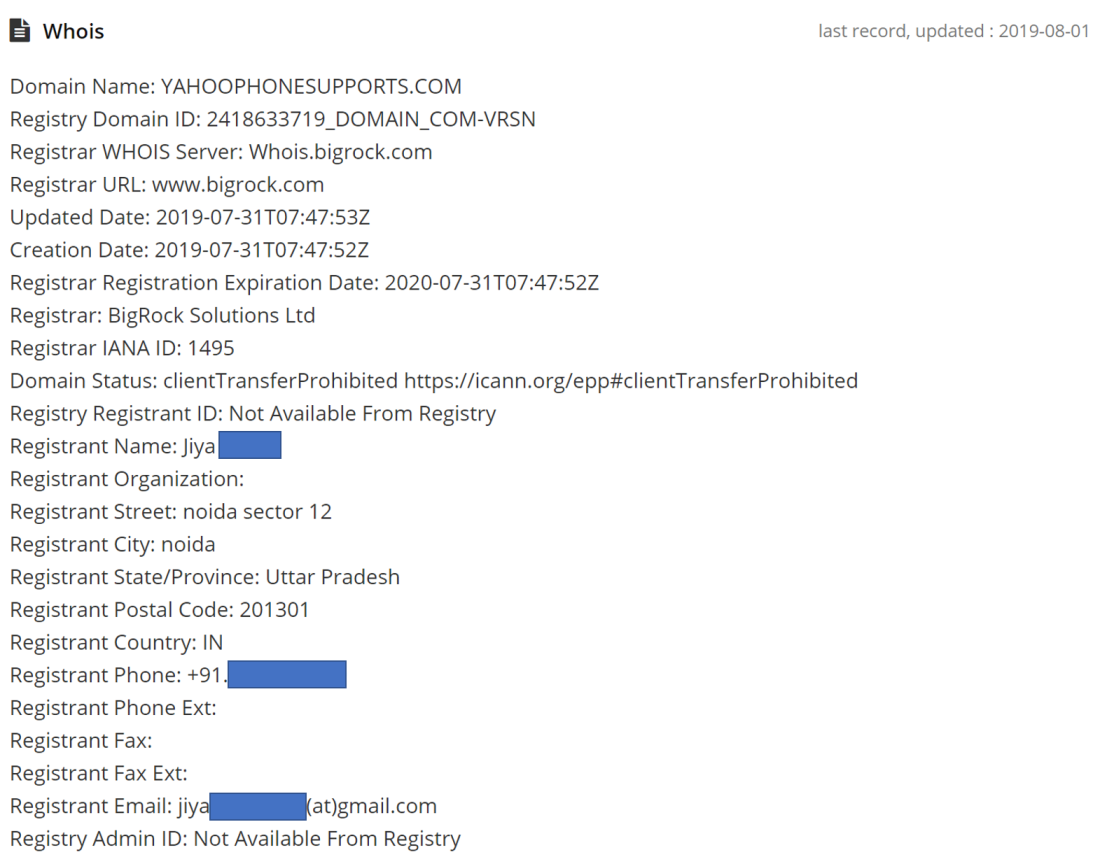 Searching for the name on Google led to a result that fits the picture: Jiya from Noida offering SEO services.

Jiya mentions backlinks and blogger outreach, something we have seen in our scam as well. Let me explain the concept of backlinks, also known as inbound links. A backlink is a link on page A referring to page B. Most search engines interpret backlinks as votes on the popularity of a website. So, the more backlinks that lead to page B, the more popular this page seems and thus it will be rated higher in search results. The easiest way to create cheap backlinks is using free blogs, for example Medium. Googling the phone number used in this scam, we come up with over 1.000 Medium posts and sites, each also containing the link to one of the fake support sites, such as nortonhelpus(dot)com.

We are not only seeing this on Medium, but across many platforms. The amount of backlinks created clearly indicates that we are dealing with a large team of people, as this is probably not possible by one person or a small team alone. The number of search results for the phone number shown above has risen from 4,000 in May to about 21,000 this week and is still rising!

Once these sites are set up, clicking on the links can be automated, so that the target website (in this case all-emailsupport(dot)com) receives traffic, basically boosting its search index rating. The scam network is not expecting to generate any phone calls or support requests from these obviously fake Medium sites, these are just used in the SEO process for the actual scam site. We have been seeing these SEO-enablers on Twitter, Issuu and basically any platform that allows you to post information “quick and dirty”.

During our project we also looked at Google Trends, to figure out where the main targets of this scam were likely located. Obviously in the US, as the main tech support phone numbers were US toll-free numbers. However, we also noticed a British phone number. Google Trends allows you to look up search terms and see the interest over time and the region of interest for that specific search term. We were curious to see if any notable searches on one of the scam topics was googled in the UK often. We checked “activate Norton”, since this was one of the main services the scam network was allegedly offering: activating an expired Norton account.

Sure enough, the main regions that googled this term were the US and India. The US is obvious. This is the market the scammers are targeting. But why does India rank higher? One explanation could be testing the search term during the SEO-process. Coincidently, some of the peaks in the interest over time relate to time periods in which new fake sites were created. No notable searches were seen coming from the UK.

As mentioned before, most of the bogus blog posts were created really sloppy, as their sole purpose was to generate backlinks. We also found several sites linked to this scam that were apparently selling software. A lot of these sites were created using predefined templates, in some cases showing the shipping time or the general location on a map.

Apparently, the creator of this site had his location (likely based on a geolocation through Google) automatically added and didn’t bother to change it before putting the site online. In any case, he achieved his goal: A backlink to a scam site.

Now that we’ve learned how this scam uses SEO to promote their wrongdoings, is there anything that can be done to effectively tamper this scam network? How about Google, Bing, Yahoo and other major search engines take any site off their listing that features “+1-844-947-4746”.

Except ours, we’re the good guys!