You don’t have to be a hacker to hijack a WhatsApp account. Simple mistakes made by your target can easily give you access to WhatsApp and other messaging apps on their phones.

When I participate in meetings, I notice that some people place their phones face-up on the table. As a curious person, I always tend to glance over at their phones whenever they light up, for instance if they receive messages. Many people actually have messages displayed on the lock screens. That means they do not have to pick up their phones and unlock them to read incoming messages. Unfortunately, this also poses a serious security threat. Not only can curious people like me read these, displaying the full content of messages on your lock screen can lead to your instant messaging accounts being hijacked. No sophisticated hacking skills are required to do so!

A company CEO mainly uses WhatsApp to communicate with business partners. An attacker first obtains the phone number that is linked to his WhatsApp account. People search engines, such as Pipl, are helpful to identify a target’s mobile phone number. Using an Android VM, the attacker can then setup a fully functional Android phone on his computer, including the installation of WhatsApp. WhatsApp on the VM is then registered with a burner phone. The CEO’s phone number is added to the contacts and WhatsApp will provide a profile picture, username and status. This information is saved, as the attacker will need it later when hijacking the actual account.

As an alternative, we could also use a real burner phone or a little gimmick called WhatsAllApp to obtain the aforementioned information. WhatsAllApp is a Chrome extension, that enables you to gather WhatsApp profile pictures, statuses and usernames based on any given phone number, even without adding these to your contacts.

The next step must happen quickly and this is where it starts to get criminal. Our attacker steals the CEO’s phone and instantly registers a WhatsApp account on the Android VM (or burner phone), using the CEO’s phone number. Of course, this will only work if the CEO’s phone displays incoming messages on the lock screen. The SMS verification code is then used to register WhatsApp on the burner phone or in the VM. From now on, all incoming WhatsApp messages will show up on the attacker’s WhatsApp. This works with other messaging apps as well. Of course, the attacker cannot see the chat history, but he will be able to interact with the contacts from that point on and possibly gain vital intelligence.

Using this technique could give an attacker a 1-2 day timeframe to hijack WhatsApp and other messaging apps. As soon as the CEO notices his phone is stolen, he will obviously have his phone and SIM card locked. However, how many people would actually think about giving all their contacts a heads-up that they currently are not available? Quite a challenge without a phone.

So much for the theory behind such an attack. I have noticed that my colleague’s phone displays messages on the lock screen and his wife texts him quite often. I decided to hijack his phone this morning.

While he was in a meeting across the hall, he left his phone on the desk. I used his phone number to set up a WhatsApp account on my Android VM. The SMS verification was immediately visible on his lock screen, I didn’t even have to touch his phone. 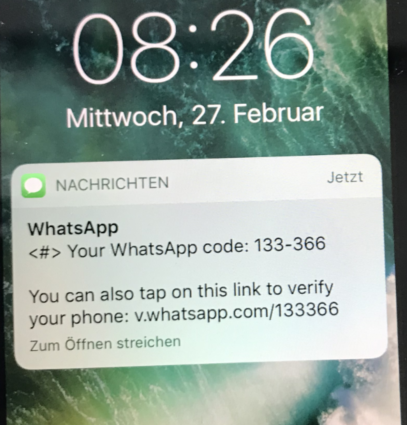 After entering this code, his account was mine! Of course, I used his profile picture, username and status in the hijacked account. Shortly afterwards I received the first incoming message. It was sent by his wife, asking about their lunch plans for the day (she works nearby). I texted back and suggested pizza, upon which his wife named a meeting place and time. When my colleague returned from his meeting, I was happy to inform him that he would be meeting his wife at 1230 in front of the mall and that they would have pizza.

There are several lessons to be learned here:

And as of now I will live in fear, because I am sure my colleague will retaliate this prank soon.