Using OSINT to enable SIGINT. Imagine you are a SIGINT analyst keeping track of India’s nuclear forces. Luckily, you have some OSINT skills, which enable you to find selectors related to the former commander-in-chief of these forces. This could be a door opener to the current leadership…

So far, I have written short posts on how OSINT can support military decision makers as well as being a vital part of HUMINT operations. The key statement is that each intelligence collection type (ICT) requires a certain amount of OSINT to successfully prepare and conduct operations. This is a concept I call ‘Interdisciplinary Intelligence Preparation of Operations’, in short: I2PO.

One of the most secretive ICTs is Signals Intelligence (SIGINT). In many cases SIGINT services or SIGINT branches within services are isolated from other ICTs, thus making a cooperation between them challenging. This is one reason why SIGINT should incorporate dedicated OSINT capabilities, especially when doing preparatory research on new target areas or specific target decks.  On the one hand, OSINT could provide general information on the telecommunications infrastructure of a target area and on the other hand, OSINT could actually provide valuable selectors to task.

There are many different ways on how to support SIGINT with OSINT using the vast variety of OSINT tools and skills. In the following example, I would like to point out how to acquire additional selectors for a certain target deck.

Let us assume we are SIGINT analysts working on the India target desk, specifically the desk tasked with conducting SIGINT against India’s nuclear forces. A country’s nuclear forces are among the most highly protected and secretive assets. Finding SIGINT leads and selectors to gather credible information is an almost impossible task in this context. I assume the direct communication of these forces is secure and hardened. As a result, collecting official military communications from their dedicated channels can be ruled out. What other chances do we have to gather intelligence on our target?

SIGINT, as all other ICTs, feeds off mistakes that our targets make. If people were OPSEC-aware, we would not find so much information on the internet, HUMINT sources would not be so talkative and eavesdropping in on communications would not reveal that much. With this in mind, let us find a hands-on, doable approach towards our target. Sometimes people use non-secure communications to transmit confidential information. Our targets might do the same. So our first step would be to identify targets and their non-official selectors, hoping these could be tasked and provide valuable intelligence.

Unfortunately, none of the current leadership of India’s nuclear forces, the Strategic Forces Command (SFC), is overt enough to provide us with additional non-official selectors. To start, we look at the former leadership, expecting that they might still be in contact with some of the current administration. Press reporting indicates that the previous commander in chief of the SFC, Lieutenant General Amit Sharma, handed over his command in July 2016. This is close enough for us to assume that General Sharma will still occasionally get in touch with his former comrades.

Next up is an extensive Google search on General Sharma. As a high-ranking former member of the military, he might have directorships or board memberships in civilian companies. In our case he does not, so searches in company databases remain negative.

One of my favorite Google dorks is ‘filetype’, specifically looking for PDFs or PPTs. PDFs and PPTs often contain a lot of information, which helps give an overview of the target and sometimes provides leads for further research. 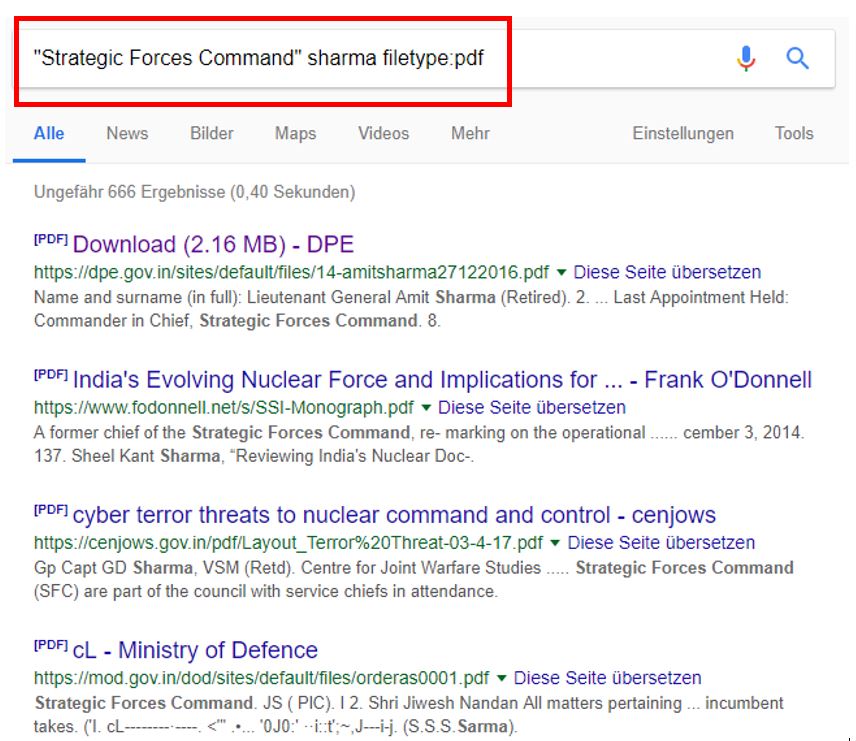 This search results in several hits, mainly being studies and conferences in which General Sharma participated. However, the first hit is actually the gold nugget we have been looking for. In India, the Department of Public Enterprises hosts a database containing former CEOs, directors and government officials; including short résumés.

Let’s have a look a General Sharma’s résumé: 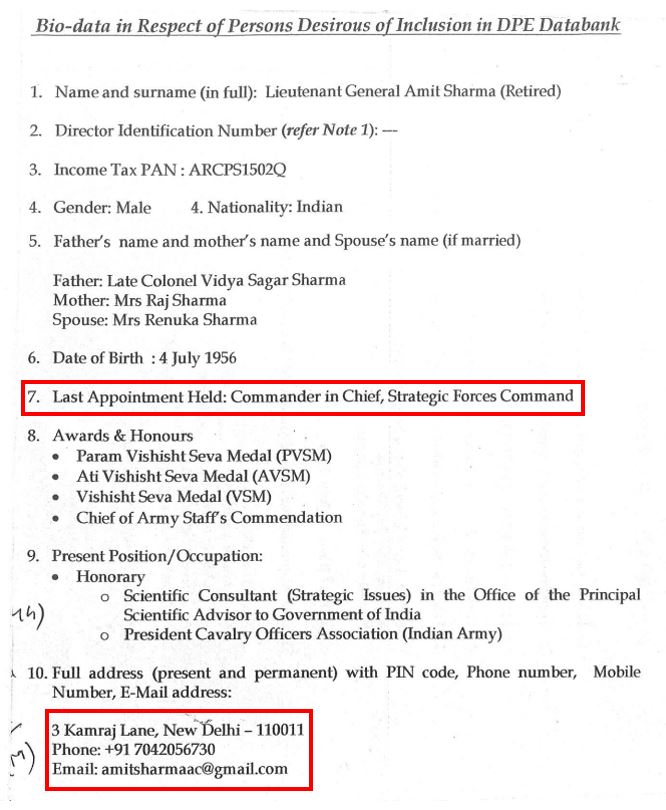 Now we have a private email address and a mobile phone number belonging to General Sharma. These two selectors are tasked and a metadata analysis is conducted on both. Maybe he is in contact with his old comrades in the Strategic Forces Command. This is the door opener we needed to successfully approach our goal. We can also look up the address, which seems to be his home address. Sometimes this will also lead to further selectors.

I also hope that General Sharma did not use Dropbox to save the nuclear launch codes. Haveibeenpwnd lists his email and password as one of those hacked in the Dropbox data leak mid-2012.

As this examples shows, it is essential for SIGINT analysts to include OSINT research into their daily workflow.

Disclaimer: Although the data shown is real, the complete scenario described here is fictional. I have no idea if this information is known or used by intelligence services, nor do I have any insight on the assumption that India’s Strategic Forces Command is an intelligence target.