In a previous post I explained a concept I named ‘Interdisciplinary Intelligence Preparation of Operations’ and how this could be used to support military operations.

This post will concentrate on the use of OSINT to prepare and monitor HUMINT operations. I will not distinguish between military intelligence HUMINT and sources used by law enforcement agencies or journalists. In both cases, getting access to a source and the preparatory work needed for this are quite similar. Each HUMINT operation starts with the identification and selection of a potential source, thus finding someone in vicinity of our actual intelligence target, who is able to consistently report key intelligence. In the past, even the acquisition of a source was accomplished by HUMINT means. A case officer heard or knew of someone who might have access to specific information and he then talked his way around to finally approach the potential source.

With more and more information being available online, especially through social networks, this approach can be done virtually in some cases. Scavenging Facebook, VKontakte, Instagram, but also LinkedIn and Xing can prove very valuable when searching for potential sources. Of course, this always depends on how outgoing a potential source is on the internet. Sometimes an approach solely through social media could be sufficient, at other times this will not produce any results at all.

The following diagram in theory depicts the steps for OSINT support to a HUMINT case. This scheme is roughly based on the general intelligence cycle with its different stages. We have planning & preparation, collection, processing and evaluation and lastly dissemination covered. In our case the information will be disseminated to the HUMINT operation, which itself will start the whole intelligence cycle over again. 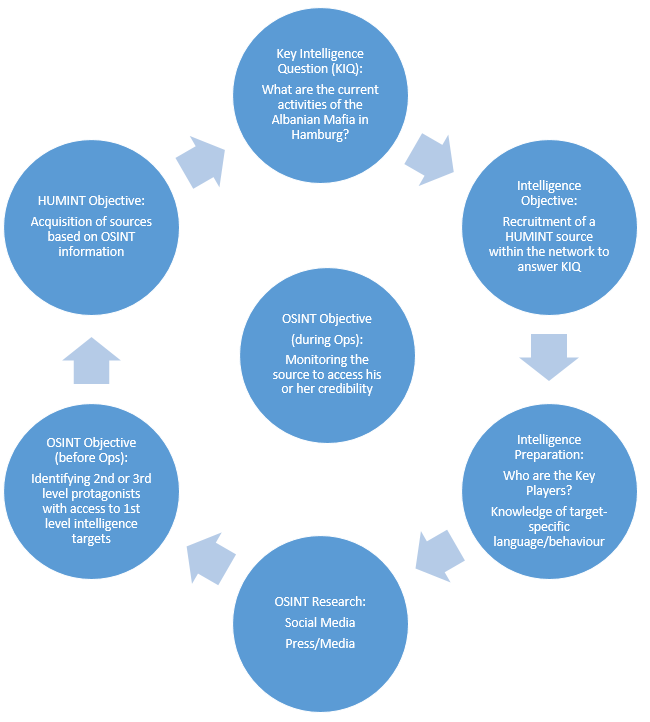 For a better understanding, I have created a fictive case (well, some of it is true…). Let us assume we are part of police special commission in Hamburg focused on the Albanian mafia. The recent shooting of an Albanian national and member of the local Hells Angels, with ties to the Albanian mafia, caused an upstir among different mafia groups operating in the area. So far, no information has emerged on the background of the shooting and existing police sources struggle to provide any intelligence on this topic. The Key Intelligence Questions (KIQ) are ‘What are the current activities of the Albanian mafia in Hamburg?’ and ‘Are there signs of an uprising conflict between different mafia groups?’

Therefore, our special commission has decided to attempt to win additional sources within this network of mafia groups. The higher leadership in a mafia network will not easily cooperate, so someone on the perimeter, with insight into the core, has to be found. Instead of the traditional approach on the streets, we will use OSINT to pave the way ahead of any physical approach.

This leaves us with our initial intelligence objective: Recruiting a HUMINT source within this network to answer the KIQs. Before we start our hunt for sources there are a couple of things we need to know. Who are the key players, do they have nicknames? We should have in-depth knowledge about our targets, e.g. is there target-specific behavior or a specific language used? Having this information gives us a baseline, which we can use to start our OSINT research. Our first step is to identify the known key players and their online profiles. Luckily, most of them are active on Facebook and Instagram and they like showing off their flamboyant life style. Clubbing, exotic cars, girls and champagne seem to be a vital part of the thug life in Hamburg.

This chart depicts the results of the OSINT research on the core network of Albanian mafia in Hamburg, as it is visible on Facebook and Instagram. Now that we have found our potential intelligence targets online, we can survey their activities and figure out who is linked to them. There are many people surrounding this core network, so how can we identify someone who might be worth recruiting as a HUMINT source?

While reading comments to the pictures that these guys post, we stumble upon an individual who constantly idolizes the mafia leadership and their henchman und who frequently asks when he will be a part of ‘the inner circle’. ‘Soon’ is the most common reply and over the course of time he seems to get annoyed. Furthermore, a quick check in police databases reveals that he was registered  on minor crimes and was not yet linked to the Albanian mafia. Let us draw a quick conclusion: We have a person with a criminal record, who has contact to senior leadership of the Albanian mafia and is increasingly aggravated on the fact that he is not fully accepted in the organization yet. That sounds like a promising HUMINT source to me!

Keep in mind that this whole procedure, especially the actual HUMINT work done afterwards, takes time. No quick success will come from this. Once we have acquired the source and he is reporting from within the network, our OSINT work does not stop. Now is the time to evaluate the HUMINT information with OSINT. As we have already seen, our targets are very active on social media and this also applies to our source. If our source tells us he had met with one of the bosses on a specific date or time, it could be validated through a Facebook or Instagram post.

One day our source tells us, that in the aftermath of the shooting, the Albanian mafia leadership had met with Chechen mafia leadership the previous evening. At first, this seems unbelievable, as we had assumed that these two groups were currently opposed to each other. One of the Albanian leaders posted about this the following day on Facebook:

This picture not only shows the Captains of the Albanian mafia, but also senior leadership of the Chechen mafia and our HUMINT source. We now know the meeting took place and we have the statement of our source on the topics of the meeting. It is vital that the source does not know we are tracking him and others on social media. We would not want any of this to be staged to back his statements and purposely give us false leads.

This short and fictive case shows how to use OSINT to enable HUMINT and to support HUMINT while an operation is ongoing. Of course, these techniques could also be applied by military HUMINT as well as journalists, as long as the targets and the potential sources are able to be located online.

One thought on “I2PO: OSINT in Support of HUMINT Operations”